The  Pan Valley Institute of the American Friends Service Committee is organizing a vigil followed by a workshop presented by special guest Maestro Pergentino Jose Ruiz.  Pergentino Jose Ruiz is a Zapoteco writer, poet and teacher in the state of Oaxaca Mexico.  He will be speaking at the vigil on Friday August 19th from 6:00 PM-7:00 PM on the Mexican Education Reform and its effects on schools and communities.  He will also lead a workshop in Zapoteco on Saturday and one is Spanish Sunday.  The workshops will be on Zapoteco literature and the preservation of the language.

I’m sure that many people don’t know what the Mexican Education reform is or why there is so much controversy around it, well picture this, how many times  have we heard from political campaigns that they will be the change that we need?   Since I was a child I have witnessed the evolution of change in politics, at least the concept of change.  I still remember how each election year politicians would promise change ans say this time it will be different and that would only leave the country with the same depressing results.  This continues to be the case and it will be for many years to come until we take action.  This brings me to the topic of this blog post, the reformation of Mexico.  The current government of mexico has been heavily criticized for the implementation of many “reformas” or reforms that are aimed to alleviate some of Mexico’s aches.  Among those reforms are Energy reform, Finance Reform, Housing Reforms and an Education Reform.  The last has generated mass discontent among people that oppose its implementation.

From where I stand I find it hard to understand what all there reforms mean to people, or to communities.  Recently there has been a wave of violence in my home state of Oaxaca as a result of the failed implementation of the education reform.  Living outside of mexico its hard to keep up with news and quite frankly the media often times doesn’t cover much.  People like myself have to rely on hearing from relatives in Mexico or digging around the web to find something reliable.  That is why workshops and presentations like Maestro Pergentino’s are important.  So that we could educate ourselves on what is going on back home and so that we are able to come together and show support to our people even if were far away.  In the end we need to stay informed because how many times do we need to be promised change in order to understand that change only happens if we make it happen. 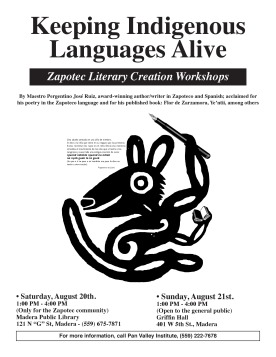 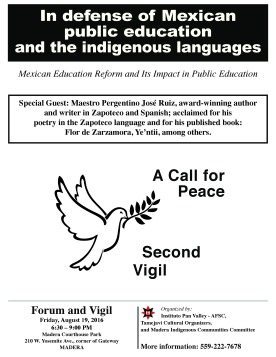